As a new user coming to Desktop Linux, I like Fedora 34 Workstation because it is the only linux distribution that is capable of resuming most of the time after putting my computer to sleep. It is also very fast, and capable on my quite powerful desktop computer (AMD 3950X/5700XT/64GB RAM). But the one thing that kept bugging me is using Eclipse.

Eclipse and third-party package managers like those that work on linux distributions is a nightmare. They try to manage the Eclipse distribution in ways that is ill conceived and they are usually far behind the realities of Eclipse proper. Also it is quite nasty to try to update your Eclipse installation and install plugins etc in such a scenario as I have experienced in the past. But now that the Java package managers have thrown the towel into the ring, you really can’t use Eclipse without downloading the distribution yourself and use that.

But downloaded Eclipse doesn’t work (very) well in the Wayland/Gnome desktop environment because you have to start Eclipse using a commandline prompt. No icon, it doesn’t show up in the search or applications list. But using the following settings you can make this happen and have your downloaded Eclipse become a first party on your desktop.

Create a tekst file called eclipe.desktop in ~/.local/share/applications/ and add the following contents (modified for your system/installation of Eclipse obviously):

Now all that rests is to update the application database to have this show up in your application searches: 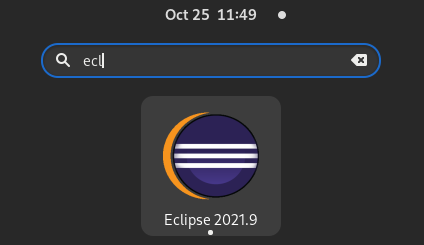 This was mostly written for myself to remember how to do this, as the search for a tutorial for this was quite difficult.